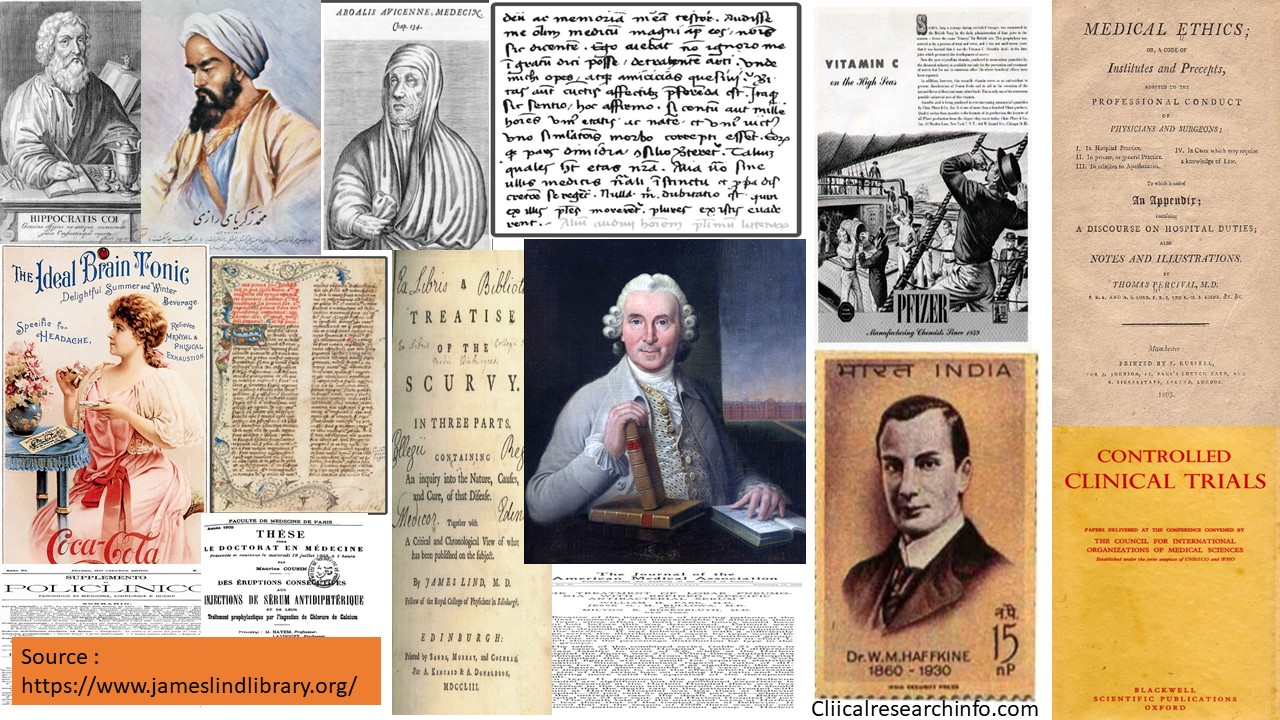 The History, Present and Future of Clinical Trials

Ever wonder about clinical trial history? Here is a riposte.

My career journey started in 2014 as a trainee in clinical research, since then I eager to know its basics. Not books basics but the practical scenario and evolution of clinical trials. My mind was popping up with the questions like Which trial was first conducted? Which study design conducted 1st? What is the pre-James era? How are clinical trials evolve from traditional to EDC and decentralized clinical trials?

If you also want to know, read ahead!

I thought to write about the history in detail but all contents are available on the internet and easily accessible, hence I am covering and linking all the relevant articles here.

The concepts behind clinical trials are interesting. The first unofficial clinical trial can be traced back to biblical times when a king tracked the effects of different diets on his subjects.

More than two millennia ago, the Greek physician Hippocrates stressed that a competent researcher must ensure that his starting point is knowledge of what has already been discovered. The Book of Daniel chapter 1, verses 12 through 15, for instance, describes a planned experiment with both baseline and follow-up observations of two groups who either partook of or did not partake of, “the King’s meat” over a trial period of ten days. Persian physician Avicenna, in The Canon of Medicine (1025) gave similar advice for determining the efficacy of medical drugs and substances.

A lot to know in detail about the clinical trial history and James Lind Librarydid the lion’s share of the work. The James Lind Library collects historic cases related to clinical trials and has developed fantastic resources to explain the importance and elements of the conduction of clinical trials. The James Lind Library (www.jameslindlibrary.org) has been established to improve the public and professional general knowledge about fair tests of treatments in healthcare and their history. Its foundation was laid ten years ago at the Royal College of Physicians of Edinburgh, and its administrative center is in the College’s Sibbald Library, one of the most important collections of historic medical manuscripts, papers, and books in the world.

The James Lind Library is a website that introduces visitors to the principles of fair tests of treatments, with a series of short, illustrated essays, which are currently available in English, Arabic, Chinese, French, Portuguese, Russian and Spanish. A 100-page book– Testing Treatments–is now available free through the website, both in English and in Arabic and Spanish translations.

To illustrate the evolution of ideas related to fair tests of treatments from 2000 BC to the present, the James Lind Library contains key passages and images from manuscripts, books and journal articles, many of them accompanied by commentaries, biographies, portraits and other relevant documents and images, including audio and video files. New material is being added to the website continuously, as relevant new records are identified and as methods for testing treatments evolve. A multinational, multilingual editorial team oversees the development of the website, which currently receives tens of thousands of visitors every month. I would suggest visiting the website once and enjoy the ride from Hippocrate 500 BCE to date journey.

I am linking all the articles of https://www.veristat.com. You can click on the below link to read in detail.

As per the NCBI article of @DR. Arun Bhatt “Evolution of Clinical Research: A History Before and Beyond James Lind”, The world’s first clinical trial is recorded in the “Book of Daniel” in The Bible. This experiment resembling a clinical trial was not conducted by a medical, but by King Nebuchadnezzar a resourceful military leader. This experiment is well explained in “Legumes, lemons, and streptomycin: A short history of the clinical trial.”

From this trial, we understood the initiation of open-labeled groups.

James Lind was a Scottish doctor and considered the first physician to have conducted a controlled clinical trial of the modern era.

It took another century before the emergence of another important mile stone in the history of modern clinical trial: the placebo. The word placebo first appeared in medical literature in the early 1800s. Hooper’s Medical Dictionary of 1811 defined it as “an epithet given to any medicine more to please than benefit the patient.” However, it was only in 1863 that United States physician Austin Flint planned the first clinical study comparing a dummy remedy to an active treatment. He treated 13 patients suffering from rheumatism with an herbal extract which was advised instead of an established remedy. In 1886, Flint described the study in his book A Treatise on the Principles and Practice of Medicine. “This was given regularly and became well known in my wards as the ‘placeboic remedy’ for rheumatism. The favorable progress of the cases was such as to secure for the remedy generally the entire confidence of the patients.”

Clinical Trials and the 1938 Food, Drug, and Cosmetic Act

The Medical Research Council (MRC) UK carried out a trial in 1943-4 to investigate patulin treatment for (an extract of Penicillium patulinum) the common cold.6 This was the first double-blind comparative trial with concurrent controls in the general population in recent times. It was one of the last trials with the non-randomized or quasi-randomized allocation of subjects. The MRC Patulin Clinical Trials Committee (1943) was chaired by Sir Harold Himsworth, and its statisticians were M Greenwood and W J Martin. This nationwide study enrolled over a thousand British office and factory workers suffering from colds. This was quite a challenging endeavor in wartime,

The study was rigorously controlled by keeping the physician and the patient blinded to the treatment. The treatment allocation was done using an alternation procedure. A nurse allocated the treatment in strict rotation in a separate room. The nurse filed the record counterfoil separately and detached the code label for the appropriate bottle before asking the patient to visit the doctor. The statisticians considered this an effective random concurrent allocation. .However, the outcome of the trial was disappointing as the analysis of trial data did not show any protective effect of patulin.

Efficacy Under the 1962 Drug Amendments

Clinical Trial Regulations of 1970 and the DESI Process

Sackett D, Straus S; for Firm A of the Nuffield Department of Medicine (1998)

The Future of Clinical Trials Series: Part I

The future of clinical trials

What Will Clinical Trials Look Like In 10 Years? Experts Forecast 3 Key Trends

The future of clinical trials is set to change with real time data and technology : Abhishek Shah

Go look at the history!

Come back here and tell me about this journey. I bet you’ll have something to say!

I am truly grateful to @juned mansuri for helping me in this research.