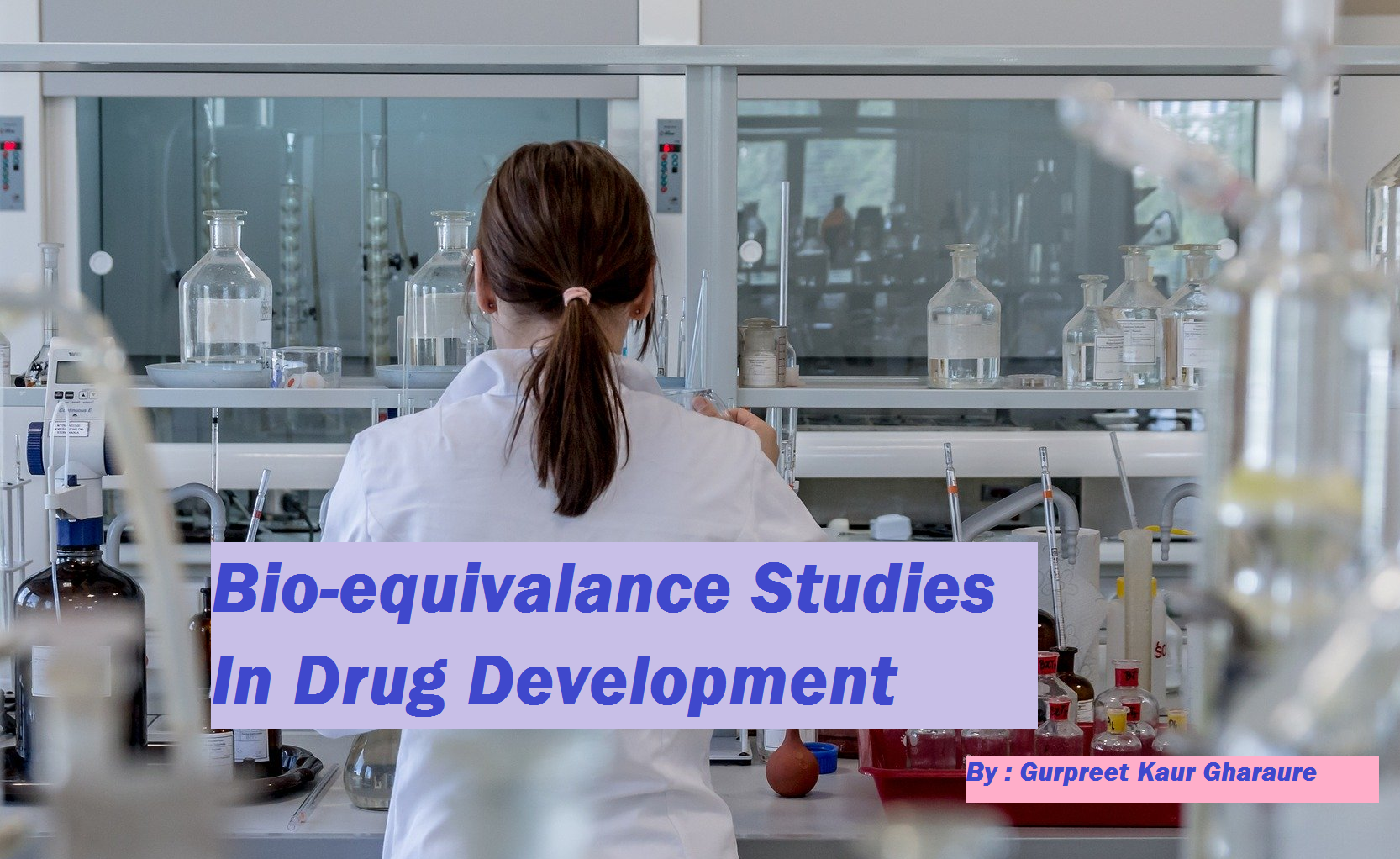 Bioequivalence studies are determined by comparison of parameters like:

The designs for bioequivalence studies are determined by:

1.Scientific question and objectives to be answered.

2.Nature of reference material and dosage form,to be tested.

3.The availability of analytical methods.

4.Pk and Pd of drug substance.

The FDA provides the guidance for the performance of In-Vitro dissolution and In Vivo bioequivalence studies which include(Solid dosage form):

The meal is consumed over 30min with administration of drug(240 ml of water) immediately after meal.

2.The primaryanalysis for bioequivalence is determined by evaluating the difference between the proportion of patients in the test and reference treatment groups who are considered a therapeutic cure at the end of the study.

3.The superiority of the test and reference products against the placebo is also tested during the same dichotomous endpoint of therapeutic cure.

1.For certain drugs and dosage forms,systemic bioavailability and bioequivalence are difficult to ascertain for eg.cyclosporine,verapamil,are considered to be highly variable.

2.The number of subjects required to demonstrate bioequivalence for these drugs product may be excessive,requiring more than 60 subjects.

3.The intrasubject variability may be due to the drug itself or to the drug formulation or to both.

4.The FDA has held public formulations.

Hence, a cross over design is suitable in bioavailability or bioequivalence trails to avoid the influence of an intersubject variation. This design is used mainly for drug, and its metabolites have long elimination half-life. The carryover effects or dropouts were less in parallel studies compared to crossover studies.

As recommended by the USFDA , in most bioequivalence studies, a test drug is compared with the standard reference drug in a group of normal healthy subjects of age 18–55 years, each receives both the treatments alternately, in a crossover fashion (two-period, two-treatment crossover design), with the two phases of treatment separated by a washout period of generally a week’s duration and it mainly depends on the half-life of the drug .

If the elimination half-life of the drug increases, the washout period also increases. The drug formulation either test or reference is given to each human volunteer randomly but an equal number of subjects receives each treatment in each period. In the case of two treatments, groups 1 and 2, one group receives the treatment in the order A and B, and the second group receives in the reverse order B and A.

Intersubject variability is observed for several drugs in clearance. The intrasubject coefficient of variation (approximately 15%) is usually substantially smaller than that between subjects (approximately 30%), and therefore crossover designs are generally recommended for bioequivalence studies.

For most of the drugs in a crossover design, at least 10 half-lives should be allowed between treatments. This should ensure the elimination of 99.9% of the administered dose and a maximum carryover of less than 0.1% from the first treatment. The number of washout period is a function of the half-life and the dose of the drug administered. The number of washout periods in a study depends upon the type of crossover design used and the number of formulations to be evaluated.

In the case of digitoxin, which has a half-life of 6–9 days, the total study period exceeds 1 year if four formulations have to be evaluated using Latin square design. Because a very large number of drugs have been found to have half-lives between 1 and 10 hours, a washout period of 1 week was usually found suitable in most of the reported studies. It should be noted that the metabolites of the drug should also be eliminated from the body before the commencement of the next treatment.

Test product may be new drug formulations developed by pharmaceutical technologists or new dosage forms of an existing drug. A test product may be compared to a reference standard recognized by the Food and Drug Administration for getting approval for marketing the drug product.

A generic test product has to compare with standard innovative dosage form to verify it’s in vivo performance. In general, the Food and Drug Administration (FDA) accepts any innovator’s drug product as a reference standard. The innovator is the one who originally received approval from the FDA to market the product in the country.

Urinary excretion studies are used when it is either not possible to measure a given drug in the blood, plasma or serum or when ethical considerations do not allow the collection of samples over a period of time.

The advantage of this method is it involves a noninvasive method of sampling, the concentration of the drug in the urine is often greater than serum and the amount of the drug excreted in urine is obtained directly. But it is not useful in estimating the absorption rate of rapidly absorbed drugs and sometimes metabolites may interfere with the estimation of the unchanged drug in the urine sample.

Sampling must be continued for a sufficient time period to ensure that the area extrapolated from the time of the last measured concentration to infinite time should be less than 20% of the total AUC. AUC calculations are not useful in case of enterohepatic recycling where the terminal elimination rate constant cannot be calculated accurately.

The studies should be performed on healthy volunteers with the aim to minimize variability between the study drugs. Subjects may be males or females; however, the choice of gender should be consistent with usage and safety criteria of the drug. To minimize variations, Intra and intersubject variation, the study design should be standardized as much as possible and acceptable

Bioequivalence studies are performed to compare the bioavailability of the generic drug product to the Innovative product.

In vivo point of view, Bioequivalence can also be considered as performance measures of the drug.

If the test products are bioequivalent and therapeutically equivalent to innovator drug, then the clinical efficacy and the safety profile of these drug products are assumed to be similar and may be substituted for each other.

Basic topics that you need to be prepared for Pharmacovigilance Interview